How Should We Respond to Free Speech? 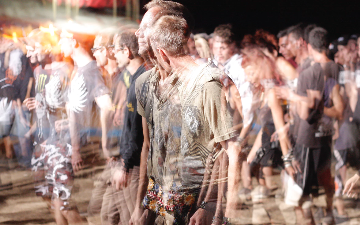 Free speech can be controversial and offensive. It can introduce ideas we aren’t comfortable with or reaffirm moral trends that we don’t like. It can speak about politicians who may be violating their oaths, or supporting their ideas instead. It can speak against all government, some government, or none of it. Our offense to a particular idea isn’t indicative of it being morally defunct, only that it’s outside of our comfort zone. Free speech has been in the news a lot lately  from Sony’s decision to not release a satirical political movie (a decision they later rescinded) to protests and hashtag activism both for and against law enforcement and concerns over a growing police state in America. It’s very easy for us to look at an issue and take the polar opposite extreme in order to show our disagreement with that issue. This is happening with the polarization of the nation on the topic of law enforcement. Polarization doesn’t help either side. It puts the greatest distance between two sides with no hope of coming together, just like opposing ends of a magnet. Polarization is to the free flow of ideas what isolationism is to our relationship with other countries. Which begs the question, if polarization is not a liberty-minded response to free speech, then what is?
Article Contents show
1 How does our society typically respond?
2 How should we respond to free speech?
3 Afterthoughts
4 How Useful Was This?

How does our society typically respond?

Today in the Rio Rancho Observer, I wrote about the Jesus, Pot Story that’s not about Jesus or Pot. In this case there was a student who took offense to the notion that Jesus would heal the sick by giving away free marijuana to sick people. In response, this student filed an official complaint to Cleveland High School, and the teacher was subsequently forced to resign. This student is, allegedly, a conservative Christian who likely comes from a family that opposes the legalization and medicinal use of marijuana. (Medical marijuana is legal in the state of New Mexico). They could also be objecting to the use of Jesus as a response to the assigned purpose; to take a story from myth or legend and re-imagine it for modern times. The student who wrote the original story is also said to be a Christian, but likely one that comes from a background that doesn’t appear to oppose at least medical marijuana.

As you can read in my article, it took CHS administration fabricating or coercing evidence of false charges against the teacher, Katrina Guarascio, in order to force her to step down. CHS’s official statements to the media was that there were concerns about sexually explicit material being used in the class, an accusation that doesn’t even begin to make sense when taken in full context. Aside from the fact that Guarascio found no complaints in her file concerning sexually explicit content, if there truly were complaints against her, why did the school district sit on them until an issue of free speech came up? Why weren’t those reports given to the law enforcement for investigation? Why would the school district allow a potential sexual predator to be around the students?

What about the #ICan’tBreath controversy? A police officer wrestled a large man (Eric Garner) to the ground and ended up choking him out which resulted in his death. His death sparked outrage amongst the African-American community and those who have been opposing the apparent uptick in police brutality this last year. Supporters of law enforcement became outspoken in response blaming Garner for his own death, saying he was too overweight. The further polarization has resulted in an “you’re either with us or against us” mentality. You either support us 110% or you’re our opposition. Both sides are (generally speaking) exercising their free speech. So how can we make progress when two sides, both expressing free speech, are polarized?

How should we respond to free speech?

If you don’t like what a person says, is it proper to go to a government official and ask that the government silence the person whom you oppose? The student at Cleveland High School didn’t have to go so far as to try to get her teacher in trouble, and the school district could have used this controversy as a teaching moment. Communities don’t have to become divided over law enforcement. It really comes back the lesson that Katrina Guarascsio tries to teach her students: critical thinking. We should respond to controversial and offensive speech by thinking critically about it. What is so offensive about Jesus giving out marijuana to the sick? Is that marijuana is illegal for recreational use? Why is it illegal? When did it become illegal? Who wanted it made illegal and why? Is it reasonable that it was made illegal? Is the story so offensive because the assignment was about myths and legends? What’s a myth? A culturally relevant story that may be true or false. Is it really offensive for Jesus to be culturally relevant?

Why was Eric Garner being arrested in the first place? Over selling cigarettes without a license, which means that the tax can’t be collected. Is that worth a man’s death? Is it worth the murder of two NYPD police officers? What about their families? Did they share the opinion that Garner’s death wasn’t a problem with the police? Did the shooter assume that all police are bad? Do the police assume that everyone is suspect? Could it possibly be that we have too many laws, and that everyone is suspect?

In my second article in this series I posted a list of Socratic questions that Socrates used to get his students to learn without telling them anything. He simply took a student’s idea and tested it by asking that student a bunch of questions. Socrates was able to lead his students to more correct answers simply by causing them to question what they thought they knew to be true, and this is a fabulous way to respond to things that are controversial or offensive. It gives us an opportunity to question both ourselves and those with whom we (think we) disagree. It is a protection against polarization which is dangerous to a free society, and allows us to educate ourselves instead of relying on other people.

Both the examples above are far more convoluted and complicated than what I’ve presented here and both deserve more analysis, but that’s the whole point of this series. Without free speech, we would not be free to explore these topics more in depth. So if you feel that I didn’t adequately evaluate one or both of these stories, comment below. The point of free speech is to express, improve, and correct our ideas. Iron sharpens iron and that’s ultimately what we should do with speech. But we only have the power over our own speech. We can’t control others nor are we beholden to them to provide them a platform. So in this new year, be responsible for your own speech. Create your own soap box, on your own property (be it blog, a facebook page, a youtube channel, a journal, letters to the editor, etc.) There’s many avenues for building your soap box. And when you’ve created it, keep those Socratic questions in your back pocket and ask them as often as you can.

The US government has failed miserably at times in history to uphold free expression rights, among many others. It’s a reminder to us that the government is fallible and sometimes the worst offender of aggression against humanity. Even those who support the Constitution, don’t quite understand in practice what they were supporting. This adds, once again, to the idea that the government which governs least, governs best.