Why Fictional Literature Should Be Taken More Seriously Among Christian Libertarians

I recently came across an article by Author Mark Tapson who wrote:

“The most compelling science fiction is that in which the core of the story is not the threat of hostile aliens or Death Stars, but the dangers posed by our own humanity.”

And there are few better examples of such compelling science fiction than the old Twilight Zone series where Rod Serling often used fictional threats—like aliens—to shine a penetrating light on real-life threats.

But where are those storytellers like Serling today? Where are those men and women who are cleverly adept at using the vehicle of fiction to share far deeper truths to a much wider audience who would otherwise not be interested in seeking out those truths?

Dare I suggest, they’re all around us?

They’re the lesser-known Christian and libertarian authors whose books we give little regard to, but whom we should familiarize ourselves with because—after all—who better understands “the dangers posed by our own humanity” than Christians and libertarians?

We’re drawn to them—enchanted by them actually—and although non-fiction books are great, there’s something deeply intoxicating about a well-crafted fictional tale.

And when it comes to changing the world around us, it could be argued that fiction has been more successful at influencing readers than most non-fiction.

The use of storytelling, be it in books, movies, television, art, or music, has long been a catalyst for change in our culture, because, as Francis Schaefer once observed, “For many, what they see on television is more true than what they see with their eyes in the external world.”

But why is this true?

Nancy Pearcey, in her book Saving Leonardo, attempts to answer this question:

“T.S. Elliot once noted that the serious books we read do not influence us nearly as much as the books we read for fun (or the movies we watch for entertainment). Why? Because when we are relaxing, our guard is down and we engage in the ‘suspension of disbelief’ that allows us to enter imaginatively into the story. As a result, the assumptions of the author or screenwriter may go unnoticed and seep all the more deeply into our consciousness.”

It’s through the age old art of storytelling that authors possess the power to shape the hearts and minds of others, yet today, this medium is most often neglected by Christian libertarians.

Consider that two exceedingly popular books written in the last hundred years is George Orwell’s 1984 (the go-to book for warning of the evils of collectivism) and Ayn Rand’s Atlas Shrugged (often credited as a gateway drug to libertarianism for those who make it through its voluminous pages). And then consider that one of the most successful and admired books in the world for over 300 years has been John Bunyan’s beloved Christian classic, Pilgrim’s Progress, which has sold over 200 million copies and has never been out of print since its first publication in 1678.

What do these three books have in common? They’re all works of fiction. And the truth is, as much as we may not want to admit it, they’ve all reached a broader audience than the likes of F.A Hayek, Murray Rothbard, and Frédéric Bastiat, or R.C. Sproul, Charles Spurgeon, and John MacArthur.

These three novels alone did more to introduce the world to libertarianism and the Christian faith (respectively) than most non-fiction books advocating the same ideals.

But why are authors who promote libertarianism and the Christian faith—through the conduit of fiction—so often ignored by those who share these same beliefs? Perhaps it’s because the allure of intellectualism is so great that most don’t feel there’s any value in trifling with fiction, although an appeal to the likes of Orwell, Rand, and Bunyan would prove otherwise.

Conversely, however, our adversaries have not neglected the persuasive power of fiction, art, film, and music—they’ve actually been exploiting these areas to advance their agenda for decades. In fact, hijacking the arts was just one of their many steps designed to bring America to its knees in subjection to a Marxist dystopia.

In 1958, W. Cleon Skousen revealed communism’s 45 goals to take over America in his book, The Naked Communist. Goals 20-25 pertained directly to arts and entertainment:

22. Continue discrediting American culture by degrading all form of artistic expression. (An American communist cell was told to ‘eliminate all good sculpture from parks and buildings,’ substituting shapeless, awkward and meaningless forms.’)

24.Eliminate all laws governing obscenity by calling them ‘censorship’ and a violation of free speech and free press.

25. Break down cultural standards of morality by promoting pornography and obscenity in books, magazines, motion pictures, radio and TV.”

Instead of competing with them in the arena of arts and entertainment, we abdicated these influential areas to our sworn enemies so we could focus on the more serious avenues of influence, like non-fiction. And now we are paying the price as we and our children are drowning in the most base, vulgar, and profane movies, music, art, and literature imaginable. This alone—if for no other reason—should be impetus enough to support Christians and libertarians in the arts.

“Many ministries and [Christian] activist groups pay no attention to the arts unless it is expedient—unless it gives them an opportunity to mount a public protest, rally the troops, and raise money. . . . Where is their ongoing support for creative people who are gifted to lead the culture in positive directions? . . . The long-term solution is to support Christian artists, musicians, authors, and screenwriters who can create humane and healthy alternatives that speak deeply to the human condition.”

Now this does not mean we should settle for subpar efforts. On the contrary. We should seek out and find the books, films, art, and music that not only exemplifies our beliefs, but does so in the highest quality. The story should be worth telling, and it should be told well. And if it is, then it should be supported, encouraged, and shared by Christian libertarians everywhere.

Unfortunately, many Christians and libertarians have not been very encouraging to or supportive of creatives in their own camp, and thus, the artists whose very labors could evoke real change, end up withering on the vine.

So, what do we do? Nancy Pearcey gives us direction:

“Where is the music and art that expresses biblical truths so eloquently that it invites people to embark on a search for God? Christians must go beyond criticizing the degradation of American culture, roll up their sleeves, and get to work on positive solutions. The only way to drive out bad culture is with good culture. . . . The church must once again become a place with a reputation for nurturing artists, those with a special gift for giving visual and imaginative expression to biblical truth.”

Aldous Huxley, author of Brave New World, observed: “The propagandist’s purpose is to make one set of people forget that certain other sets of people are human.” There’s no doubt as to the level of success the propagandists of Marxism have had. But the good news is, our side also has the tools and the talents to combat the propaganda of our adversaries. But Christian libertarian authors, artists, film makers, and musicians, can’t do it alone. With your support and encouragement, our message can reach far and wide in our endeavor to remind “one set of people” that “certain other sets of people” are human, are made in the image of God, and are deserving of life, liberty, and the pursuit of happiness. 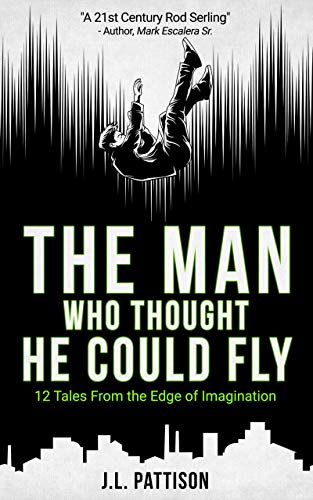 The Man Who Thought He Could Fly: 12 Tales From the Edge of Imagination by J.L. Pattison

J.L. Pattison—who’s been compared to the likes of Rod Serling and M. Night Shyamalan—is the author of The Island and Saving Kennedy, both of which have won awards for Best Libertarian Fiction. His latest book, The Man Who Thought He Could Fly, is a collection of tales grappling with such topics as war, abortion, gun control, freedom, aging, and death, all cleverly delivered through the engaging medium of fiction, and reminiscent of The Twilight Zone.

Find out more at JLPattison.com.