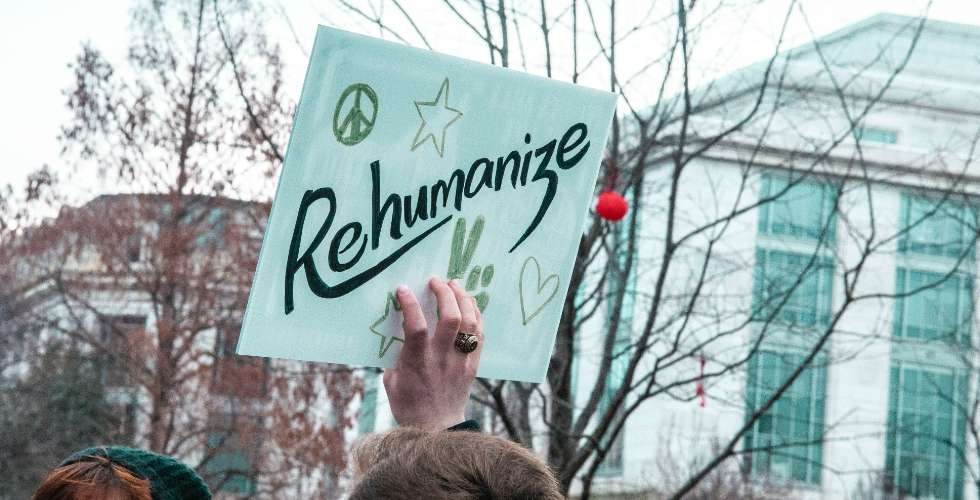 Americans haven’t changed much in their approach to abortion over the past fifty years. Since Roe v Wade, conventional arguments on both sides have traversed various fields of philosophy. At the same time dancing around, but never addressing, the actual question; a question about the legal nature of human rights.

Both sides attempt to answer the question of legality by confusing a legal theory of rights with ethical, ontological, and religious arguments in their favor. None of this gets at the heart of the legal question of rights. In this confusion, both sides permit the rights question to remain vague and ambiguous. This results in theories that make human rights legally relative, confusing, and compromisable.

Libertarianism sets aside the ethical, ontological (metaphysical), and religious aspects by focusing on a legal theory of rights. This may sound like it might ignore these other important aspects. Instead, it clears the air and allows us to understand the proper categories of these things.

The Three Facets of the Conventional Abortion Debate

The personhood question of abortion now sounds like a pro-life talking point. But it actually began as a pro-choice one. Philosopher Mary Ann Warren first argued that “personhood, and not genetic humanity, is the fundamental basis for membership in the moral community. A fetus, especially in the early stages of its development, satisfies none of the criteria of personhood.” One problem for Warren is that she simultaneously offers the criteria for personhood rather than employing an already agreed-upon standard. In her estimation, humans are persons if and only if they demonstrate six particular traits: sentience, emotionality, reason, the capacity to communicate, self-awareness, and moral agency.

The primary objection is that she overstates the qualifications for recognition of human rights. Her six criteria necessarily exclude a myriad of born humans as well. But the typical pro-life response doesn’t counter her argument on the same terms. They instead counter on religious terms. Specifically an appeal to the Christian concept of the Imago Dei and/or the passage in Scripture about being “knit together” in the womb. (Ps. 139:13) And while it’s right that a Christian understands personhood from Scripture, offering Warren a religious response is missing the point.

Self-ownership doesn’t answer questions about sentience, emotionality, reason, communication, self-awareness, or moral agency. Although, many of these are of interest to Ludwig von Mises’ concept of human action. Since we can separate self-ownership from human action, libertarian self-ownership covers all human beings, including those disenfranchised by Warren’s argument. And while it doesn’t rely on religious beliefs, it doesn’t negate them either.

While Warren makes more of an ontological (metaphysical) argument, she does wade into the ethical debate. What she does is make the ontological case, for the ethical case, that abortion is a legal-right. But she does this without actually addressing any theory of rights. At best she operates on the assumption that what is moral, should be legally enforced. No wonder the abortion debate is so convoluted! But this is par for the course. Prolifers make the same mistaken and convoluted arguments.

The predominant ethical argument in favor of abortion is Judith Jarvis Thomson’s “Violinist.” This is a famous thought experiment involving a medical procedure done against the will of another individual. I wrote more about that here. Thompson grants that a fetus is a person from conception. She then argues that “the right to life does not guarantee having either a right to be given the use of or a right to be allowed continued use of another person’s body – even if one needs it for life support.”

Dr. Walter Block’s theory of evictionism rests heavily on Thomson’s own reasoning; the two are strikingly similar. And while the volatility of the abortion debate today sounds much less sophisticated, the underlying moral argument is still there: unborn babies don’t have a right to the mother’s womb. The only real difference between Thomson’s argument and today’s pro-choice rhetoric, is that Thomson delimits her own argument quite a bit and still advocates the idea that abortion is not “always permissible.” Today’s abortion advocates would disagree.

Libertarianism changes the abortion debate because it sets aside (or should set aside) the ethics debate altogether. Again, this is not to say the matter of ethics of abortion (or more broadly, the ethics of human reproduction) is unimportant. But just because an action is ethical, doesn’t necessarily mean that action should be coerced or prohibited by law. Again, we have to address the legal question of rights.

Carl Trueman writes, “If we are to believe those who defend a right to abortion, it is nothing less than the power to end the life of her unborn child that guarantees a woman her humanity—that is, the autonomy befitting her status as man’s equal. That is a denial of what really makes us human: our natural dependence upon, and obligations towards, one another.” (emphasis added) This traditionalist view always denies a woman’s bodily autonomy and agency. They invariably focus on her dependence (and that of her fetus) on men.*

Christian prochoicers also have their religious arguments. The Christian feminist view comes from Beverly Wildung Harrison. She’s known as the “mother” of Christian feminist ethics. Harrison argues a God-given right to reproductive choice necessarily involves a legal right to abortion. She first made this argument in 1984. It has all the language we hear today from the progressive left of white privilege elitism and the abuses of a misogynist culture. These are the reasons, Harrison argues, a woman has a divine right to determine who will be born.

Here’s the major mistake of both of these views: a religious confirmation of personal bias. These two positions posit the answer to the legal question of rights, by contriving overstatements about what Scripture has to say about women. They never grapple with what rights are, how humans have them, or how to identify them in life beyond what is moral.

Perhaps Trueman hasn’t read Aldous Huxley’s, Brave New World. Huxley illustrates a humanity totally dependent upon and obliged to one another. This view results in denial of every sexual and family ethic Trueman holds dear. My bet is that Trueman would deny that level of dependency and obligation to our neighbor. But to do so, he must agree that humans (including women) have bodily autonomy and agency.

Harrison is right to argue a divine right to bodily autonomy and agency. She errs in overstating the degree of authority that gives a woman over her fetus. But she also argues reproductive choice means, “[finding] lines of strategy that will simultaneously bring about both less reliance on abortion and less resort to coercion of women and enforced childbearing. Nothing less would be a genuine moral compromise.”

This is a powerful statement. But where this can be easily conceivable with an understanding of Austrian economic theory, Harrison finds it utopic; only found through socialist means. Libertarianism changes the abortion debate because it changes the prospect of prolife society from utopic to realistic.

How libertarianism changes the abortion debate

Libertarianism changes the abortion debate because it doesn’t need a metaphysical theory of personhood to establish human rights. The principles of self-ownership and non-aggression answer these questions, and do so without jumping back and forth through a number of rhetorical hoops.

In fact, libertarianism resolves many social concerns over a woman’s bodily autonomy and agency. And it can do so without resorting to compromising the rights of the fetus. What’s interesting about pro-choice arguments is they all grant arguendo the fetus is a human from conception. But many pro-choice libertarians don’t even grant that. Some appeal to a Warren-esque type argument for personhood qua self-ownership, but this simply demonstrates a lack of understanding of self-ownership.

Libertarianism changes the abortion debate by establishing human rights through self-ownership. The beginning of self-ownership, from conception, clear’s the way to discuss a whole host of issues libertarians have been notoriously bad at answering. Issues including children’s and parents’ rights, rape and sexual crimes, abuse, and the transition to Mises’ concept of human actors, among others.

A legal theory of rights must answer the question of abortion (and reproductive freedom). Libertarianism changes the abortion debate because it reorients our understanding such that we can more accurately address other pressing questions.

*I will do a more complete response to Carl Trueman in a separate article.