This page is continually updated

Article Contents show
1 Kerry Baldwin’s Libertarian View of Abortion
1.1 join my effort by becoming a monthly member
2 Abortion
2.1 How the Prolife Movement is Aborting a Prolife Era
2.2 The Christian Feminist View of Abortion
2.3 Libertarianism, Abortion, and Fetal Self-Ownership (1 of 2)
2.4 Libertarianism, Abortion, and Fetal Self-Ownership (2 of 2)
2.5 Libertarianism and Abortion: A Debate (Soho Forum Debate, December 2019)
2.6 INTERVIEWS
2.7 ARTICLES
2.8 FAQs
2.9 Learn more about a Christian libertarian view of abortion
2.9.1 How Useful Was This?

Conflict on the issue of abortion exists and is escalating, because of one thing: compromise.

A compromise, even a principled one, begets ambiguity.

I hold that a libertarian view of property rights will resolve this problem, and my research is working toward that end.

join my effort by becoming a monthly member

How the Prolife Movement is Aborting a Prolife Era

This is a constructive criticism of the prolife movement, particularly the latest attempts by Abortion Abolitionists to criminalize abortion. mereliberty.com/003

The Christian Feminist View of Abortion

This is a constructive criticism of the so-called Christian feminist view of abortion, a.k.a. “safe, legal, and rare” formerly of the Clinton Administration. mereliberty.com/007

Libertarianism, Abortion, and Fetal Self-Ownership (1 of 2)

This is a presentation of Murray Rothbard’s case for human rights in terms of property rights, and how the consistent application of his philosophy suggests that the unborn have the negative right to non-interference. mereliberty.com/009

Libertarianism, Abortion, and Fetal Self-Ownership (2 of 2)

This is the second part of the above presentation where I show how the natural state of pregnancy lends itself to limited positive rights of the fetus from her parents for life support, contra Rothbard. mereliberty.com/010

This is the full recording of my debate with Dr. Walter Block on a libertarian theory of abortion: https://reason.com/video/2019/12/19/whats-the-correct-libertarian-position-on-abortion-a-soho-forum-debate/

“You’re a Christian! Why aren’t you making the case that abortion is sinful?”

There are many different ways to make an argument. The typical argument is to make a moral case for or against abortion. Those who’ve argued abortion is immoral (or sinful) have failed to be persuasive. The complexity of situation of unwanted pregnancy is never cut and dry. Many concede a woman is choosing is “the lesser of two evils.”

I agree that abortion is sinful. But I also acknowledge the moral argument against abortion is unpersuasive. Strict pro-lifers, including Abortion Abolitionists, are outraged that society is not persuaded. And perhaps that’s reason enough to be outraged. However, outrage won’t successfully advance the cause of human rights for women and the unborn. And that’s why I’ve chosen a different approach.

“How can a Christian advocate for ending the practice of abortion, without expecting conversion to Christianity as well?”

Is man’s law somehow superior to God’s law? Seems like a strange position to take as a Christian. No historic reformed confession holds that civil authorities are a Means of Grace. Therefore we cannot construe the civil law as having affect on Regeneration of the heart. Moreover, the requirements of God’s law for salvation are not fulfilled by Christian converts. Only Christ’s active and passive obedience has fulfilled the Law of God. Christ’s fulfillment of the law, and propitiation to the redeemed, is what’s necessary for right standing before God. Man’s adherence to our civil laws, even if aligned with God’s law is insufficient.

Civil law is limited in scope. The civil magistrates cannot judge matters of the heart. They can only judge acts of aggression. Where an act of aggression has not taken place, even if the heart contemplated it, the state has no proper jurisdiction before God.

The predominant view of the pro-life cause has always been to criminalize immediately. Even incrementalists would prefer it. Many believe, that if we just pass a law this alone will save millions of unborn babies. This view is naive at best. The decades long war on drugs demonstrates the problem with using legislation to stop an unwanted human behavior. Obviously the drug war is disanalagous from abortion in that abortion involves a victim. However, the facts remain: the war on drugs, enacted to stop drug use and shut down cartels, failed miserably. A war on abortion, enacted with the same end goal, to stop abortion and shut down abortion cartels, would fail too. The war on drugs has not only failed, but taken down millions of innocent people with it. This should a warning to us that a war on abortion would result in failure and injustice.

“Are you saying that abortion should remain legal?”

No. Abortion should not remain legal. However, merely passing laws for their own sake are not solutions. The state is capable of acts of aggression against the people and when such aggression perpetrated, the people ultimately have no recourse. So in considering how to criminalize abortion, we must take into the overall system of enforcement. Even the context of Romans 13 is in light of Romans 12. Romans 12:21 exhorts us, “do not be overcome by evil, but overcome evil with good.” There’s no reason why this shouldn’t apply to the context which God-ordained civil governance operates.

Learn more about a Christian libertarian view of abortion 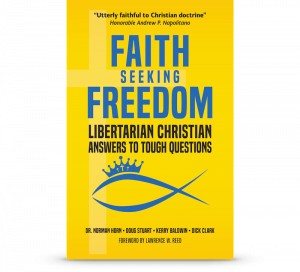 Discussing Christian faith and politics is tough. If you’re tired of the typical left/right answers that sound like they were pulled from last night’s cable news, then you need a new way of thinking about faith and politics. This book will help you take your political conversations to the next level.

In Faith Seeking Freedom, the Libertarian Christian Institute has gathered together some of the brightest minds at the intersection of Christianity and libertarianism to collect brief but thoughtful answers to over a hundred questions frequently posed to liberty-loving believers